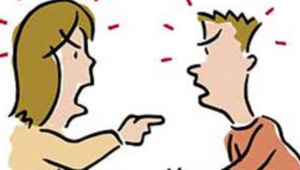 Have you played this card game? My friend’s family busted it out after Thanksgiving dinner the other day and we went a few rounds.

It’s the second time I’ve played it. The first was a couple of years ago at a work event. The concept is super cute. It’s written in a jokey, slightly-less-raunchy-but-similar-in-tone-to-Cards-Against-Humanity kind of way where you pick cards and one player might end up as a demon-possessed-car that shoots sadness rays, and another player might end up an army of fembots on segways that throws burritos (or whatever).

Anyway, the cards are silly and funny but the gist of the game is that you have to argue with the other player why your character will win. And that’s where it gets a little questionable. Because in the wrong situation (say, a work event or a Thanksgiving dinner) arguments can get heated and it can get sort of weirdly personal all of a sudden.

So…. a cute game as a concept but you definitely want to be with a low-key, comfortable group. Watching your friend and her husband go toe-to-toe in a manufactured argument about superpowers is a wee bit uncomfortable, and being told that you’re a weak, spineless coward (even in jest) by a work colleague that you don’t particularly like isn’t a great feeling either.