I’ve been having these nagging feelings about running lately. I’m finding myself less and less motivated to do it. I haven’t felt like this in a long time, but now, when I go out to run a few miles (as I did this week on Santa Fe’s excellent Rail Trail) I find that I want to stop running and just start walking every few minutes.

I like getting outside, and I like the way exercise takes weight off my shoulders and makes me feel more productive and energetic overall. I also still like to run fast for short periods of time, which has always been my favorite thing. I like to sprint up a basketball court. I like to run down a fly ball. I even like to race my son to the nearest tree. That stuff is fun. It gives me a rush and then it’s over pretty fast.

But just jogging for long periods of time at a moderate pace is less and less interesting to me, and feels like more and more of a slog (than a jog).

Which got me thinking about my history of running, and about… aging. And about… mortality. And about… ugh.

I mean… maybe I’m over the hump in terms of what I’m athletically capable of doing. Is that possible? It’s a little bit depressing if true. 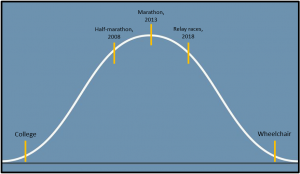 In college I started running occasionally with a couple of varsity soccer players. I found it painful and difficult. Running a mile seemed like a real accomplishment and like something I didn’t really want to repeat any more than once every couple of weeks.

In 2008 I ran my first half marathon, encouraged by a work friend who wanted a partner. I’d never run more than half that distance to that point, but I pretty much killed it (relatively speaking), nailing a 7:40 pace the entire way and coming in the top 20% of my age bracket.

In 2013 I ran my first and only marathon. It was by far the farthest I’ve ever run, and I hit the so-called wall around mile 22 or 23 where I could barely lift my legs above the pavement. I finished that at just over 4 hours, which is pretty damn decent, especially for a first-timer.

That was the pinnacle of my running career.

Since then I’ve run a few more half marathons, but never approached my 2008 pace. And though I ran two relay races this year (one in Oregon and one in upstate NY) my times continued to flag and by the last leg of them I wondered why the hell I ever thought it was a good idea.

So maybe I’m on the way out. It’s okay. It happens. And there’s still some oomph inside me. But I’m beginning to rethink my plans to run a second marathon next year. Do I really want to train that hard? It doesn’t sounds like fun. In fact, it sounds painful, just like it did in college. Maybe it’s time to just take a stroll now and then. Walking to the nearest Walgreens to get the NY Times isn’t so bad. And I can start shopping for fashionable canes so I don’t resist that idea when it comes time to need it.

(although in an interesting coincidence, my friends at Ragnar sent this article about how running sucks sometimes just as I was typing this up; hmm….)