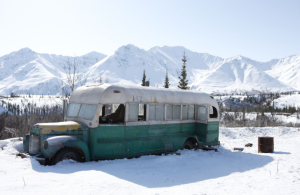 HIM: This book is stupid.
ME: Why?
HIM: Because the main character basically just kills himself in a stupid way, and we’re supposed to care.
ME: He doesn’t kill himself.
HIM: He might as well. He goes into a dangerous situation with limited supplies with a high probability of death, and then he dies. That’s stupid.
ME: But isn’t it interesting to think about WHY he does that?
HIM: No.
ME: But what would make someone from a privileged background give it all up, go on an adventure, and see if he can survive in the wilderness.
HIM: I don’t care.
ME: It’s interesting to me.
HIM: …
ME: Maybe it’ll mean more to you later.
HIM: …
ME: A lot of people are very affected by this story.
HIM: …

Anyway, we’re not done yet, but it’s good to get his take. Maybe he’s got a point…