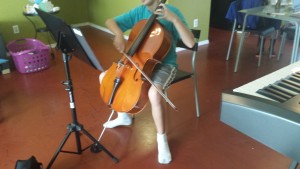 So my kid is ramping up for his first orchestra concert of the season this week.  He loves performing and the feeling of getting applause at the end of a show in a crowded hall (diva!) and so I think he’s looking forward to that.

However, he hates to practice so much that he’s threatened to quit the orchestra time and time again over the past couple of months.

I’m torn on this because I know the feeling.  My mother taught me the piano when I was his age and younger.  And I dreaded each lesson and practice session.

And then I took the trombone in junior high and high school and found it incredibly tedious at times (except occasionally during performances).  And then I played the drums on the side—and kind of loved it for its physicality and lack of musical complexity.

So I know how it feels to loathe practicing, and I don’t know if all the hours I put into it as a kid were REALLY worth it in the long run.

It’s a balancing act, I guess.  But I feel the urge to let him ease up on the practicing while at the same time I know that it’s integral to his overall educational experience, and that he needs to keep up with the other kids if the orchestra is going to sound good.

Will continue to look for the right balance, I guess, knowing it may never come.

Am hoping this week’s concert gives him another jolt to continue with the work for another month or so—until the next concert.

What are you gonna do.  Parenting, amiright?

(This recent article does make a case for some significant brain improvements based on music practicing, including “an enhanced ability to detect emotional cues in conversations.”  Hmm, will that motivate him?  Unlikely)