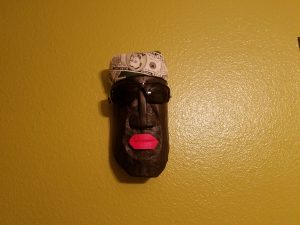 This is a sad, kind of personal post, but I wanted to jot it down somewhere.

One of my kids’ preschool teachers, known as Mr. Richard, passed away over the weekend, and it’s really hit me hard.

He was one of the sweetest, kindest-hearted and generous men I’ve known. The whole class loved following him around the yard, climbing on top of him and learning how to drum from him.

One of his creative hobbies was traditional African mask-making (he changed his name to Ngadesa after a long visit to Africa). The kids and I went to an art show of his which was put together by an admirer. He sold every single mask he’d made and seemed completely humbled and overwhelmed by the attention.

I wanted to buy one from him at the show, and had a couple in mind that I thought would fit with my (so-called) décor. But my youngest son had his heart set on this one (pictured) which depicted a kind of gaudy rapper dude. TOTALLY my kind of thing.

Anyway, it’s up on my wall now and it’s fit in pretty well with the house’s style over the past ten years. It’s a nice reminder of him. He was only 44 when he died and we (the world) lost a wonderful human being. His impact on our lives was significant and beautiful and memorable. We’ll miss you and think of you often, Ngadesa. 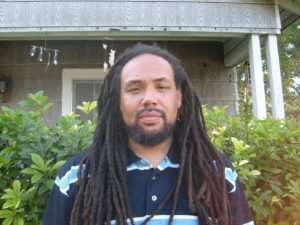