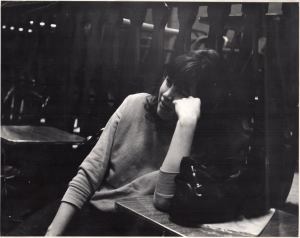 My friend Brendan is featured in just about every story I’ve told in public. So many wacky adventures we’ve had together.

I just got the news that his mom, who I always considered kind of a second, cooler mother to me, died on Thursday. I’m so glad that I was able to see her just a couple of weeks ago in Seattle. She was a shadow of her former self, but still projected her enthusiasm and contagious sense of humor, at least for the short time she let me stay.

I always thought that I wanted to be the kind of parent she was: funny, easy-going, invested in what her kid was doing, but sort of hands-off too, respecting his independence and decisions. She was a very different parent than anyone else I knew. She had a big impact on my teenage years, encouraging my wild and creative side. I’ll miss her a lot.

Brendan is remarkable with his memory of dates. This is a snippet of what he wrote about her today:

My mom died on May 18, 2017, sometime between 5:30 pm and 6:25 pm. Somebody came to bring her dinner to her at 5:30, and because she was so cantankerous and wanted to be left alone so much, nobody checked on her until 55 minutes later, when she was found by a nurse. She was not breathing and hadn’t breathed for a while. The nurse who found her, a woman named Norma, looked me up in the computer and called me immediately.

She may have choked on a piece of food, I’m not sure. It’s likely.

Earlier that afternoon, she received a bouquet of red rose and carnations with a little pink baby’s breath, with a card from “The Committee,” the improvisational comedy group that she worked for from 1963-67. She wasn’t aware of who sent it, so she called the director of the Committee and left him a long phone message, thanking him for the flowers, and then when I arrived around 4:30 pm she asked me to take the flowers away because they were taking up too much room on her table.

She was so hilariously particular about everything.

I remember how she invited four or five close friends to come suffer through my first live music concert in 1985 (when I was 13) at a club in the tenderloin called “The Sound Of Music” with my band, Reverse, featuring Max Langert on Drums, Titash Bardhan on guitar, and me on my casio keyboard on an ironing board for a keyboard stand.

That was my first band, and my first live club experience. I thought I was pretty badass to be 13 or 14 and playing in a rock club in San Francisco where I wouldn’t even had been allowed in otherwise. Despite the fact that it was a dive, there were like eight people there and we were hideous. Oh my God.

Okay, processing still. This whole dying, who ever thought THAT was a good idea???

p.s. Brendan wraps up his note with this: 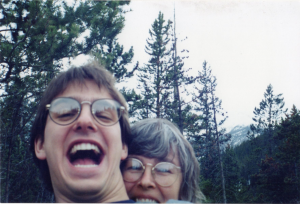 In the summer of 1990, we drove across the country after my freshman year of college. We took this photo of ourselves – an early, analog selfie – right as we crossed the continental divide. She looks happy to be with me, vital, alive, and deeply present.