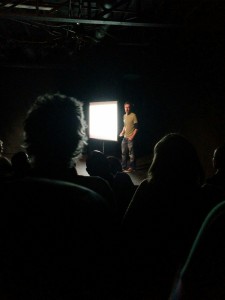 I wanted to get up a quick post about the short fringe show this past Wednesday.  Best of Week is announced late tonight, and I didn’t want the post to seem sad or disappointed in case we don’t get it.

I like how familiar the festival feels in some ways (I know the ins and outs and nooks and crannies of the building well), and even though I still get crazy nervous before hand and worry about forgetting my lines, it’s almost always a satisfying experience once I’m through.

The crowd was super supportive and laughed more than I expected on Wednesday, and I could tell people enjoyed it.

That said, there were other very good pieces that night (the closing piece was REALLY great) and I know there’s a good chance we won’t move on (especially since I feel I’m rehashing some earlier work I’ve done).

I guess that’s what I mean about the fickle allure.  I love having a piece put on, the rush of adrenalin, and it feels great to move forward and get a good response.  Of course, it also can feel like a sock to the gut when it doesn’t go well, the response isn’t great and you don’t move on.

So we’ll see how it goes.  But for the record, it was super satisfying to do, and that is (ahem, should be) enough.

PLUS I’m so excited about something new next year!  Listserv, NA, absurdity, t-shirts!!!  Keep working on that bad boy!

(p.s. thanks to ALH for the candid photo)

UPDATE: Okay, we didn’t make it, but I ended up going to Saturday’s Best of show with my dad and it was really good across the board (KC of HPT said it was one of her all-time favorites).  Was I disappointed?  Yes.  Was I devastated?  Yes.  Wait, I mean no, not entirely.

Plus, a very nice woman handed me this note and asked for the presentation slides to share with some co-workers.

It’s the second or third time someone’s asked me for source material when I’ve been in the audience, which is nice and flattering.

And then I got to be on the radio Monday with all these talented folks, and that was nice too. 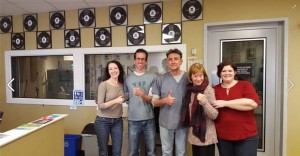 (p.s. maybe it’s time for you to get a haircut, buddy)