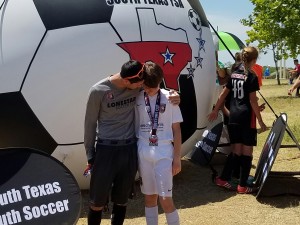 My son’s soccer team won a stunning victory against one of the areas’s top teams a few weeks ago to make the state championships for his age division.

Last weekend he went to the tournament against teams from all over the state, and they lost all three games they played.

The matches were tense, and close, and sometimes pretty brutal. His team was ahead or tied for long stretches of each game.

Of course the kids were disappointed. We all were. But my biggest takeaway was how well they all handled the losses and how graceful they were in defeat, despite the intensity and emotions that came out during play.

In some cases, the boys were more graceful than the parents who continued to blame the refs for bad calls well after the final whistle had blown.

The team’s coach (pictured sharing a private moment with my kid during the awards ceremony) is moving to Seattle this month for a great new job opportunity, and he’ll be missed. He’s been tough with the kids when he needed to be, but always fair too. A team from my son’s South Austin club has never made it this far before.

Anyway, just a sentimental parental moment to say that I’m really proud of these guys, and that I love watching them grow up and mature along the way. Great dudes.