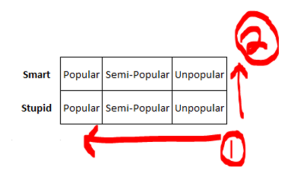 Some of my favorite parenting moments are those I get to spend with one kid while the other one is away at camp or a friend’s house.

Today I got to hang out with the older one (he’s so much more down-to-earth when his brother’s not around) and asked him about middle school. I was curious what he thought of it now that he’s three days from moving on to ninth grade.

Thankfully, he was able to put the existing social groupings into graph format for me. According to him (and he acknowledges that girls might have their own segmentation) there are just six groups (as outlined in the graphic above).

Everyone’s either smart or stupid to start, and then it’s just gradations of popularity to consider after that.

And there’s a stronger inclination and internal drive to move from unpopular to popular than there is from stupid to smart.

I asked if the stupid unpopular kids are the most difficult (I mean duh, right?) and he pointed out it was a close contest with the dumb, popular kids. Which, yeah, of course to that too…

Anyway, the dude is doing okay and made it through a period I remember as one of the roughest of my life. So…. Way to go, big fella. Let’s keep these good times rolling and the helpful graphs continuing.

(and yes, I’m procrastinating from my 5-week playwriting class; more on that later…)